Why would a 21st-century craft brewery make a 15th century, all but extinct, beer style? Well, at New Barons the brew team is tasked with brewing a beer for the people and by the people, which is what is appealing about this beer style’s long history. 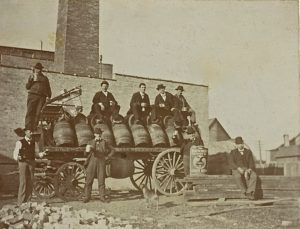 Back in Medieval Holland, the humble peasants of old had figured out a way to make a flavorful and delicious beer made from a grain that was traditionally considered for livestock – the humble oat. Wheat and barley were reserved for noble classmen and the proud brewers of those higher class beers made access to these more traditional brewing grains harder for the basal citizen. With nothing but the grains they fed their cattle, the peasant was not to be denied their beer, which is how the Kuytbier was born. Kuyt, which derives from the Dutch word Kuit or “spawn” in English, was said to also be one of the first beers to be brewed with Hops – transitioning the beer world from bizarre “gruit” herb ales to cleaner, crisper and hoppier beers that were palatable to more people. The beer was so popular with common folk it ran for nearly 5 centuries before abruptly disappearing from the common beer vernacular. One reason it may have fallen out of fashion is that better to do southern provinces of the Benelux region in Europe banned its import as it was encroaching on the local competition of more noble class beers.

New Barons is a brewery that was literally built from a community of people from all walks of life. Our mission encourages anyone to get involved in our community and all voices are heard, encouraged and the brewery does everything it can to make them feel represented. The beer is an homage to all owners, new and old, who helped us make it to this point and will carry us forward. We are proud to be a simple common folk brewery… cultured peasants enjoying the craft of brewing. 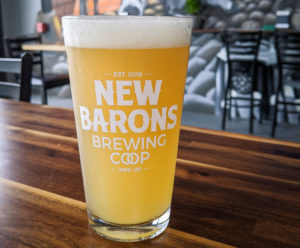 Kuytbier is comparable to Kölsch style ale, an ale predecessor to crisp, cold aged lagers. Otis (named after the simple Oat), is definitely crisp with a pilsner type hoppiness that goes down silky smooth from the overwhelming amount of malted oats used in the brewing process. Aromas of creamy grain make it a pleasant beer that is both familiar and unique. ON TAP NOW!